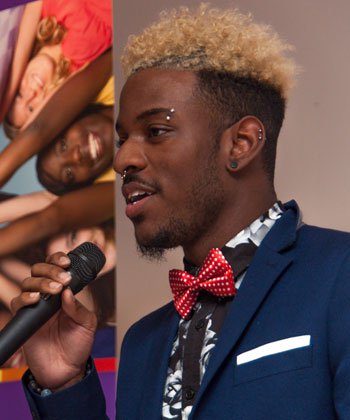 Tajai Baptiste received a Bill 7 Trust scholarship in the fall of 2016. Tajai, who's well-known in the Toronto LGBTQ community as a singer, is also known for his expressive spoken word pieces. He took time out to share his take on the challenges facing LGBTQ students - along with his favourite LGBTQ social media influencer. We urge you to check out Tajai on Youtube.

Your most memorable Bill 7 Award moment?

My most memorable Bill 7 Award experience was attending the awards ceremony and going up to speak and accept my award. I am not good in front of an audience unless I am singing. It was the first time I have ever spoken to an audience about my sexuality and the challenges I have faced, so it was definitely a milestone. It was also nice to hear the stories of others and see the both the similarities and differences among us all. Being LGBTQ does not mean we look a certain way or act a certain way, despite popular belief, and I believe this was reflected in last year’s group of recipients.

What impact has the Bill 7 Award scholarship had on your life?

The Bill 7 Award connects me as a member of the LGBT community, reinforcing that I can achieve whatever I put my mind to without having to worry about my sexuality limiting or interfering with my endeavors.

I am currently a student at University of Guelph-Humber – and I have only have one more semester left which is exciting news. By December 2017 I will have a Bachelor's Degree in Justice Studies and a specialized Diploma in Community and Justice Services. Right now, this summer of 2017, I am working at FedEx and I have interviews for two Youth Justice Support Worker positions which is very promising.

Why do you think LGBTQ-specific scholarships like the Bill 7 Award are important?

Do you have any advice for other LGBTQ post-secondary students?

My advice to LGBTQ youth would simply be to BE YOURSELF. Although it may be hard to embrace your sexuality among those who don’t support it, the affects of not being yourself are far worse mentally and emotionally than not being yourself.

If you do not have family to turn to, to speak with, there are many resources available to help LGBTQ become comfortable in their skin. I encourage any LGBTQ youth struggling with this to reach out to community centers such as The 519 – Space for Change on Church Street, in Toronto, where you can meet like-minded individuals. You are not alone, even when you may feel alone. There will always be an ear that will listen to you and hear your story. For many years, I, too, thought I was alone so this is something that I could relate to personally.

Do you have a role model you'd recommend to LGBTQ post-secondary students?

Frank Ocean is one of my favorite artists. He made headlines when he came out and spoke about his love for a man. This was particularly breaking news  due to the nature of the hip-hop industry when it comes to LGBTQ issues, and the fact that he has collaborated with megastars such as Kanye West, Jay Z, and Beyonce.

Where can we find you on social media?