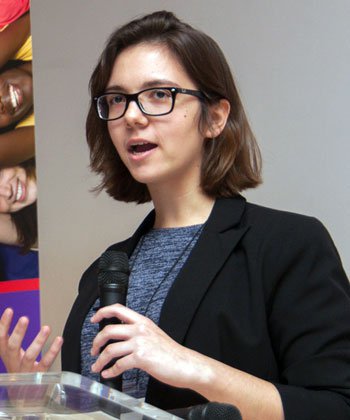 Ana Qarri received the Bill 7 Award scholarship in 2012, just before entering her undergraduate studies at McMaster University. Ana returned in 2016 to deliver the key note speech at the Bill 7 Awards presentation in November 2016. She recently completed her studies at McMaster University where she was involved in LGBTQ+ and gender equity organizations. Most recently, she has helped establish Speqtrum Hamilton, one of the city’s only initiatives focused on community building for LGBTQ+ youth.

Your most memorable Bill 7 moment?

Giving the keynote address at the 2016 Bill 7 Awards. I had a calculus midterm when I was supposed to receive my award in 2012 so, unfortunately, I wasn’t able to attend. It was a real privilege to attend the Awards Presentation for the first time four years later as a keynote guest. I had a wonderful time speaking with new recipients, sharing what I had learned throughout my undergraduate journey, and being able to thank the generous sponsors in person.

How do you think the Bill 7 Award scholarship impacts the lives of LGBTQ post-secondary students?

These kind of scholarships make LGBTQ+ youth feel important, safe, and wanted in the post-secondary environment. They provide incoming LGBTQ+ students with the confidence to engage not only in LGBTQ+ work but other activities, as well. Most importantly, they take away a significant portion of the financial burden and allow youth to focus on their education and advocacy work.

Do you have a special message to potential Bill 7 Award donors?

When you make a donation to Bill 7 Award, you are investing in a better and kinder world. You are giving people who are often told that they don’t belong in certain fields or positions that they are wanted and needed. A small donation can go a long way, and its value extends beyond its economic measure. It can give underrepresented and underserved LGBTQ+ youth the ability to create a place for themselves and to advance the community as a whole.

Why do you think scholarships dedicated specifically to LGBTQ post-secondary students are significant?

They’re significant because they recognize the struggle for LGBTQ+ rights and the presence of LGBTQ+ people as an essential part of a diverse and healthy post-secondary environment. The LGBTQ+ community is large and diverse in itself. Although parts of our community don’t face the same level of discrimination we used to, we have to focus our efforts towards BIPOC, Trans*, newcomer, and LGBTQ+ students from low-income households specifically, who face barriers and high levels of discrimination. Scholarships dedicated to LGBTQ+ post-secondary students are crucial for not only encouraging more LGBTQ+ students to attend university/college and excel, but also to build a more equitable world for everyone in our communities.

Your advice to LGBTQ post-secondary youth?

1) Don’t be afraid to get involved with LGBTQ+ causes and extra-curricular activities. Although it can be difficult to have your romantic or sexual orientation dictate parts of your social identity, the work that you do in LGBTQ+ causes is important and your leadership is valuable.

2) Being involved in extra-curricular activities is one of the most valuable things you can do throughout your degree – but don’t forget to take care of your marks as well. Both things can open a lot of doors for you in the future, and when you have great marks and great experience, there are very few things you won’t be able to do after your education.

Do you have any favourite LGBTQ social media influencers?